Cultural Development under the Mughals :
Mughal Empire Art Architecture and Painting, Literature of Mughal period witnessed a significant and widespread development in cultural activity. It was manifest in the sphere of art and architecture, painting, music and literature. In this cultural development, Indian traditions were blended with Turko-Iranian culture which was brought into India by the Mughals.

Art and Architecture :
The architecture of the Mughals includes the magnificent forts, palaces, public buidings, mosques and mousoleums. 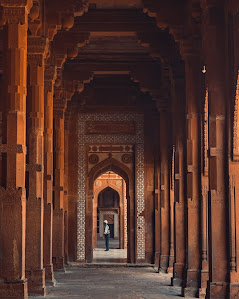 The Mughals were fond of laying gardens with running water. Some of the Mughal gardens such as the Nishat Bagh in Kashmir, the Shalimar Bagh at Lohore and the Pinjore garden in the Punjab have survived even today. During the reign of Sher Shah, the mausoleum at Sasaram in Bihar and the Purana Qila near Delhi were built. These two monuments are considered as the architectural marvels of medieval India.
Large scale construction of buildings started with the advent of Akbar. He built many forts and the most famous one was the Agra Fort. It was built in red sandstone. His
other forts are at Lahore and Allahabad . The climax of fort-building reached its climax during the reign of Shah Jahan. The famous Red Fort at Delhi with its Rang Mahal, Diwan-i-Am and Diwan-i-Khas was his creation.
Akbar also built a palacecum-fort complex at Fatepur Sikri ( City of Victory ), 36 kilometres from Agra. Many buildings in Gujarathi and Bengali styles are found in this complex. Gujarathi style buildings were probably built for his Rajput wives. The most magnificent building in it is the Jama Masjid and the gateway to it called Buland Darwaza of the Lofty Gate. The height of the gateway is 176 feet. It was built to commemorate Akbar’s victory over Gujarat. Other important buildings at Fatepur Sikri are Jodh Bai’s palace and Panch Mahal with five storeys. 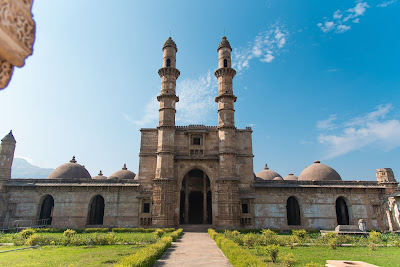 During Akbar’s reign, the Humayan’s tomb was built at Delhi and it had a massive dome of marble. It may be considered the precusor of the Agra was completed by Jahagir. Nur Jahan built the tomb of Itimaddaulah at Agra. It was constructed wholly of white marble with floral designs made of semi-precious stones on the walls. This type of decoration was called pietra dura. This method became more popular during the reign of Shah Jahan. The pietra dura method was used on a large scale in the Taj Mahal by

Shah Jahan. Taj Mahal is considered a jewel of the builder’s art. It contains all the architectural forms developed by 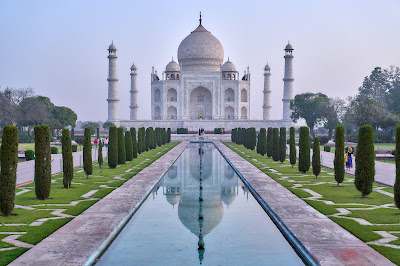 the Mughals. The chief glory of the Taj is the massive dome and the four slender minarets. The decorations are kept to the minimum.
Mosque building had reached its peak during Shah Jahan’s reign. The Moti Masjid at Agra built entirely in white marble. The Jama Masjid at Delhi was built in red stone.
The Mughal Empire architectural traditions continued in the eighteenth and early nineteenth century. Their influence in the provincial kingdoms is clearly visible. Many features of Mughal tradition can be seen in the Golden Temple at Amritsar.

Paintings and Music :
The contribution of Mughals to the art of painting was remarkable. The foundation for the Mughal Empire Epainting was laid by Humayan when he was staying in Persia. He brought with him two painters – Mir Sayyid Ali and Abdal Samad to India. These two painters became famous during Akbar’s reign. 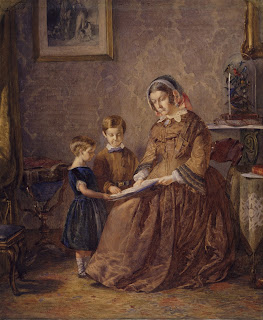 Akbar commissioned the illustrations of several literary and religious texts. He invited a large number of painters from different parts of the country to his court. Both Hindus and Muslims joined in this work. Baswan, Miskina and Daswant attained great positions as Akabar’s court artists.
Illustrations of Persian versions of Mahabharata and Ramayana were produced in miniature form. Many other Indian fables became the miniature paintings in the Art Studio established by Akbar. Historical  works such as Akbar Nama also remained the main themes of Mughal paintings. The most important work is Harznama, which consisted 1200 paintings. Indian colours such as peacock blue, Indian red began to be used.
Mughal paintings reached its climax during the of Jahagir. He employed a number of painters like Abul Hasan, Bishan Das, Madhu, Anant, Manohar, Govardhan and Ustad Mansur. Apart from painting the scenes of hunting, battles and royal courts, progress was made in portaint painting and paintings of animals. Many albums containing paintings and calligraphy were produced during the Mughal period. Later, the influence of European painting could be seen.
Music had also developed under the Mughals. Akbar patronized Tansen of Gwalior. Tansen composed many ragas. Jahangir and Shah Jahan were also fond of music.

Language and Litereture :
Persian language became widespread in the Mughal Empire by the time of Akbar’s reign. Abul Fazl was a great scholar and historian of his period. He set a style of prose writing and it was followed by many generations. Many historical works were written during this period. They include Ain-i-Akbari and Akabar Nama authored by Abul Fazi. The leading poet of that period was his brother Abul Faizi. The translation of Mahabharata into the Persian language was done under his supervision. Utbi and Naziri were the two other leading Persian poets.
Jahangir’s autobiography, Tuzuk-i-Jahangiri was famous for its style. He also patronized many scholars like Ghiyas Beg, Naqib Khan and Niamatullah. Shah Jahan also patronized many writers and historians like Abdul Hamid Lahori, author of Padshah Nama and Inayat Khan who wrote Shah Jahan Nama. His son Dara Shikoh translated the Bhagavat Gita and Upanishads into the Persian language. Many historical works were written during the reign of Aurangazeb. Famous dictionaries of the Persian language were also compiled during the Mughal period.
Regional languages such as Bengali, Oriya, Rajasthani and Gujarathi had also developed during this period. Many devotional works including the Ramayana and Mahabharata were translated into regional languages. From the time of Akbar, Hindi poets were attached to the Mughal court. The most influential Hindi poet was Tulsidas, who wrote the Hindi version of the Ramayana, the Ramcharitmanas.