Chandragupta Maurya was the founder of the Mauryan Empire. Chandragupta maurya was a first king of india. He, at the young age of 25, captured Pataliputra from the last ruler of the Nanda dynasty, Dhanananda. In this task he was assisted by Kautilya, who was also known as Chanakya or Vishnugupta. After firmly establishing his power in the Gangetic valley, he marched to the northwest and subdued the territories up to the Indus. Then he moved to central India and occupied the region north of Narmada river. 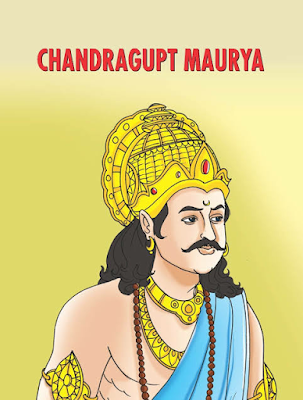 Chandragupta enbraced Jainism towards the end of his life and stepped down from the throne in favour of his son Bindusara. Then he went to Sravana Belgola, near Mysore along with Jain monks led by Bhadrabhagu and starved himself to death.

Bindusara received Deimachus as ambassador from the Syrian king Antiochus I. Bindusara wrote to Antiochus I asking for sweet wine, dried figs and a sophist. The latter sent all but a sophist because the Greek law prohibited sending a sophist. Bindusara supported the Ajivikas, a religious sect. Bindusara appointed his son Asoka as the governor of Ujjain.

There is little information regarding the early life to Asoka. He acted as Governor of Ujjain and also suppressed a revolt in Taxila during father Bindusara’s reign. There was an interval of four years he between Asoka’s accession to the throne (273 B.C.) and his actual coronation (267 B.C.). Therefore, it appears from the available evidence that there was a stuggle for the throne after Bindusara’s death. The Ceylonese Chronicles, Depavamsa and Mahavamsa state that Asoka captured power after killing his ninety nine brothers including the his elder brother Susima. The youngest brother Tissa was spared. But according to Taranatha of Tibet, Asoka killed only six of his brothers. Asoka’s Edict also refers to his brothers acting as officers in his administration. However, it is clear that the succession of Asoka was a disputed one.

The most important event of Asoka’s reign was his victorious war with Kalinga in 261 B.C. Although there is no detail about the cause and course of tha war, the effects of the war were described by Asoka himself in the Rock edict XIII: ”A hundred and fifty thousand were killed kand many times that number perished…” After the war he annexed Kalinga to the Mauryan Empire. Another most important effect of the Kalinga war that Asoka embraced Buddhism under the influence of Buddhist monk, Upagupta.

According some scholars, his conversion to Buddhism was gradual and not immediate. About 261 B.C. Asoka became a Sakya Upasaka (lay dsicple) and two and a half years later, a Bikshu (monk). Then he gave up hunting, visited Bodh-Gaya, and organized missions. He appointed special officers called Dharma Mahamatras to speed up the progress of Dhamma. In 241 B.C., he visited the birth place of Buddha, the Lumbini Gardan, near Kapilavastu. He also visited other holy places of Buddhism like Sarnath, Sravasti and Kusinagara. He sent a mission to Sri Lanka under his son of the original Bodhi tree. Asoka convened the Third Buddhist Council at Pataliputra in 240 B.C. in order to strengthen the Sangha. It was presided over by Moggaliputta Tissa.

Asoka’s inscriptions mention the southernmost kingdoms – Cholars, Pandyas, Satyaputras and Keralaputras – as border-states. Therefore these states remained outside the Mauryan Empire. According to Rajatarangini, Kashmir was a part of the Mauryan Empire. Nepal was also within the Mauryan empire. The northwestern frontier was already demarcated by Chandragupta Maurya.

The concept of non-violence and other similar ideas of Asoka’s Dhamma are identical with the teachings of Buddha. But he did not equate Dhamma with Buddhist teachings. Buddhism remainded his personal belief. His Dhamma signifies a general code of conduct. Asoka wished that his Dhamma should spread through all social levels.

Asoka was ”the greatest of kings” surpassing Alexander the Great and Julius Caesar and other renowned Emperors of the world. According to H.G. Wells ”Amidst the tens and thousands of names of monarchs that crowd the columns of history, the name of Asoka shines and shines almost alone, a star”. Asoka was true to his ideals. He was not a dreamer but a man of practical genius. His Dhamma is so universal that it appeals to humanity even today. He was an example in history for his benevolent administration and also for following the policy of non-aggression even after his victory in the war. His central ideal was to promote the welfare of humanity.

Asoka’s death in 232 B.C. was followed by the division of the Mauryan Empire into parts – western and eastern. The part was ruled by Kunala, son of Asoka and the eastern part by Dasaratha, one of the grand sons of Asoka. Due to the Bactrian invasions, the western part of the empire collapsed. The last Mauryan king was Brihatratha, who assassinated by Pushyamitra Sunga.

History of India on Paleolithic or Old Stone Age ?