The decline of the Gupta Empire was followed by a period of political disorder and disunity in North India. It was only in the beginning of the seventh century A.D. that Harshvardhana succeeded in establishing a larger kingdom in north India.

The chief suouces for tracing the history of Harsha and his times are the Harshachar written by Bana and the Travel accounts of Hiuen Tsang. Bana was the court poet of Harsha. Hiuen Tsang was the Chinese traveler who visited India in the seventh century A.D. Besides these two sources, the dramas written by Harsha, namely Ratnavali, Nagananda and Priyardarsika also provide useful information. The Madhuben plate inscription and the Sonpat inscription are also helpful to know the chronology of Harsha. The Banskhera inscription contains the signature of Harsha.

The founder of the family of Harsha was Pushyabhuti. Pushyabhutis were the feudatories of the Guptas. They called themselves Vardhanas. After the Hun invasions they assumed independence. The first Important king of Thaneswar, north of Delhi. He assumed the title Maharajadhiraja and Paramabhattaraka.

After the Hum invasions they assumed independence. The first important king of Pushyabhuti dynasty was Prabhakaravardhana. His capital was Thaneswar, north of Delhi. He assumed the title Maharajadhiraja and Paramabhattaraka.

After Prabhakaravardhana’s death, his elder son Rajyavardhana came to the throne. He had to face problems right from the time of his accession. His sister, Rajyasri had married the Maukhari ruler called Grihavarman. The ruler of Malwa, Devagupta in league with Sasanka, the ruler of Bengal had killed Grihavarman. Immediately on hearing this news, Rajyavardhana marched against the king of Malwa and routed his army. But before he could return to his capital, he was treacherously murdered by Sasanka. In the meantime, Rajyasri escaped into forests. Harsha now succeeded his brother at Thaneswar. His first responsibility was to rescue his sister and to avenge the killings of his brother and brother-in-law. He first rescused his sister when she was about to immolate herself.

In his first expedition, Harsha drove out Sasanka from Kanauj. He made Kanauj his new capital. This made him the most powerful ruler of north India. Harsha fought against Dhuruvasena II of Valabhi and defeated him. Dhuruvasena II became a vassal.

The most important military campaign of Harsha was against the Western Chalukya ruler Pulakesin II. Both the accounts of Hiuen Tsang and the inscriptions of Pulakesin II provide the details of this campaign. Harsha with an ambition to extend his kingdom south of the Narmada river marched against the Chalukya ruler. But the Aihole inscription of Pulakesin II mentions the defeat of Harsha by Pulakesin, who after this achievement assumed the title Paramesvara. Hiuen Tsang’s accounts also confirm the victory of Pulakesin.

Harsha led another campaign against the ruler of Sindh, which was an independent kingdom. But, it is doubtful whether his Sind campaign was a successful one. Nepal had accepted Harsha’s overlordship. Harsha established his control over Kashmir and its ruler sent tributes to him. He also maintained cordial relations with Bhaskaravarman, the ruler of Assam. Harsha’s last military campaign was against the kingdom of Kalinga in Orissa and it was a success.

Thus Harsha established his hold the whole of north India. The regions modern Rajasthan, Punjab, Uttar Pradesh, Bihar and Orissa were under his direct control. But his sphere of influence was much more extensive. The peripheral states such as Kashmir, Sind, Valabhi and Kamarupa acknowledged his sovereignty.

In his early life, Harsha was a devout Saiva but later he became an ardent Hinayana Buddhist. Hiuen Tsang converted him to Mahayana Buddhism. Harsha prohibited the use of animal food in his kingdom and punished those who kill any living being.

He erected thousands of stupas and established travellers’ rests all over his kingdom. He also erected monasteries at the sacred places of Buddhists. Once in five years he convened a gathering of representatives of all religions and honoured them with gifts and costly presents. He brought the Buddhist monks together frequently to discuss and examine the Buddhist doctrine.

Harsha organized a religious assembly at Kanauj to honour the Chinese pilgrim Hiuen Tsang towards the close of his reign. He invited representatives of all religious sects. It was attended by 20 kings., 1000 scholars from the Nalanda University, 3000 Hinayanists and Mahayanists, 3000 Brahmins and Jains. The Assembly went on continuously for 23 days. Hiuen Tsang explained the values of Mahayana doctrine and established its superiority over others. However, violence broke out and there were acts of arson. There was also and attempt on the life on Harsha. Soon, it was brought under control and the guilty were punished. On the final day of the Assembly, Hiuen Tsang was Honoured with costly presents.

Hiuen Tsang mentions in his account about the conference held at Allahabad, known as Prayag. It was the one among the conferences routinely convened by Harsha once in five years. Harsha gave away his enormous wealth as gifts to the members of all religious sects. According to Hiuen Tsang, Harsha was so lavish that he emptied the treasury and even gave away the clothes and jewels he was wearing. His statement might be one of admiring exaggeration.

The administration of Harsha was organized on the same lines as the Guptas did. Hiuen Tsang gives a detailed picture about this. The king was just in his administration and punctual in discharging his duties. He made frequent visits of inspection throughtout his dominion. The day was too short for him. Taxation was also light and forced labour was also rare. One sixth of the Mauryan period continued in the times of Harsha. Hiuen Tsang condemned the trials as barbarous and superstitious. Harsha’s army consisted of the traditional four divisions – foot, horse, chariot and elephent. The number of cavalry was more than one lakh and the elephants more than sixty thousands. This was much more than that of the Mauryan army. The maintenance of public records was the salient feature of Harsha’s administration. The archive of the Harsha period was known as nilopitu and it was under the control of special officers. Both good and bad events happened during his time had been recorded.

Society and Economy under Harsha :

Both Bana and Hiuen Tsang portray the social life in the times of Harsha. The fourfold division of the society – Brahmin, Kshatriya, Vysya and Sudra – was prevalent. The Brahmins were the privileged section of the society and they were given land grants by the kings. The Kshatriyas were the ruling class. The Vysyas were mainly traders. Hiuen Tsang mentions that the Sudras practiced agriculture. There existed many sub castes. The position of women was not satisfactory. The institution of Swyamvara (the choice of choosing her husband) had declined. Remarriage of windows was not permitted, particularly among the higher castes. The system of dowry had also become common. The practice of sati was also prevalent. Hiuen Tsang mentions three ways of disposal of the dead – cremation, water burial and exposure in the woods.

The trade and commerce had declined during Harsha’s period. This is evident from the decline of trade centres, less number of coins, and slow activities of merchant guilds. The decline of trade in turn affected the handicrafts industry and agriculture. Since there was no large scale demand for goods, the farmers began to produce only in a limited way. This led to the rise of self – sufficient village economy. In short, there was a sharp economic decline as compared to the economy of the Gupta Empire period.

The art and architecture of Harsha’s period are very few and mostly followed the Gupta style. Hiuen Tsang describes the glory of the monastery with many storeys built by Harsha at Nalanda. He also speaks of a copper statue of Buddha with eight feet in height. The brick temple of Lakshmana at Sirpur with its rich architecture is assigned to the period of Harsha.

Harsha was a great patron of learning. His biographer Banabhatta adorned his royal court. Besides Harshacharita, he wrote Kadambari. Other literary figures in Harsha’s court were Matanga Divakara and the famous Barthrihari, who was the poet, philosopher and grammarian. Harsha himself authored three plays – Ratnavali, Priyadarsika and Nagananda. Harsha patronised the Nalanda University by his liberal endowments. It attained international reputation as a centre of learning during his reign. Hiuen Tsang visited the Nalanda University and remained as a student for some time. 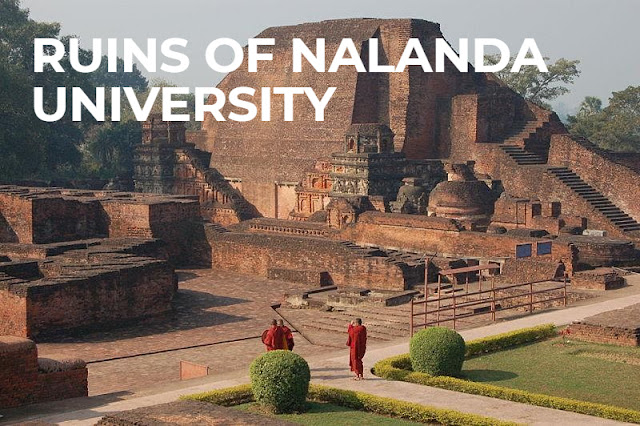 The Chinese travelers of ancient India mentioned a number of educational institutions. The most famous among them were the Hinayana University of Valabhi and the Mahayana University of Nalanda. Hiuen Tsang gives a very valuable account of the Nalanda University. The term Nalanda means ”giver of knowledge”. It was founded by kumaragupta I during the Gupta period. It was patronised by his successors and later by Harsha. The professors of the University were called panditas. Some of its renowned professors were Dingnaga, Dharmapala, Sthiramati and Silabadhra. Dharmapala was a native of Kanchipuram and he became the head of the Nalanda University.

Nalanda University was a residential university and education was free including the boarding and lodging. It was maintained with the revenue derived from 100 to 200 villages endowed by different rulers. Though it was a Mahayana University, different religious subjects like the Vedas, Hinayana doctrine, Sankhya and Yoga philosophies were also taught. In addition to that, general subjects like logic, grammar, astronomy, medicine and art were in the syllabus. It attracted students not only from different parts of India but form different countries of the east. Admission was made by means of an entrance examination. The entrance test was so difficult that not more than thirty percent of the candidates were successful. Discipline was very stict. More than lectures, discussion played and important part and the medium of instruction was Sanskrit.

Recent archeological excavations have brought to light the ruins of th Nalanda University. It shows the grandeur of this centre of learning and confirms the account given by the Chinese pilgrims. It had numerous classrooms and a hostel attached to it. According to Itsing, the Chinese pilgrim, there were 3000 students on its rolls. It had and observatory and a great library housed in three buildings. Its fame rests on the fact that it attracted scholars from various parts of the world. It was an institution of advanced learning and research.

History of India on Paleolithic or Old Stone Age ?

Human civilzation in the Neolithic Age