The Rise of the Marathas :

Various factors contributed to the rise of Marathas in the sixteenth and seventeenth centuries. The physical environment of the Marathas. The mountainous region and dense forests made them brave soldiers and adopt guerilla tacties. They built a number of forts on the mountains. The spread of the Bhakti movement in Maharashtra inclucated a spirit of religious unity among them. The spiritual leaders like Tukkaram, Ramdas, Vaman Pandit and Eknath fostered social unity. The political unity was conferred by Shivaji. The Marathas held important positions in the administrative and military systems of Deccan Sultanates of Bijapur and Ahmadnagar. There were a number of influential Maratha families such as the Mores and Nimbalkers. But the credit of establishing a powerful Maratha state goes to Shahji Bhonsle and his son Shivaji.

Shivaji was born at Shivner in 1627. His father was Shahji Bhonsle and mother Jija Bai. He inherirted the jagir of Poona from guardian, Dadaji Kondadev in 1627, Shivaji assumed full change of his jagir. Even before that he conquered Raigarh, Kondana and Torna from the ruler of Bijapur. 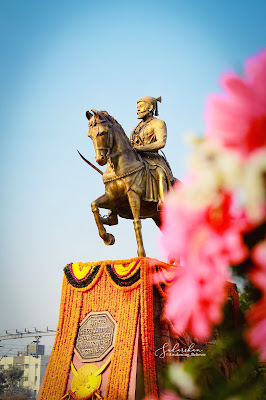 He captured Javli from a Maratha chief, Chanda Rao More. This made him the master of Mavala region. In 1657, he attacked the Bijapur kingdom and captured a number of hill forts in the konkan region. The Sultan of Bikapur sent Afzal Khan against Shivaji. But Afzal Khan was murdered by Shivaji in 1659 in a daring manner.

Shivaji’s military conquests made him a legendary figure in the Maratha region. Many came forward to join his army. The Mughal emperor Aurangazeb was anxiously watching the rise of Maratha power under Shivaji. He sent the Mughal governor of the Deccan, Shaista Khan against Shivaji. Shivaji suffered a defeat at again made a bold of the Mughal forces and lost Poona. But Shivaji once again made a bold attack on Shaista Khan’s military camp at Poona in 1663, killed his son and wounded Khan. This daring attack affected the prestige of Khan and he was recalled by Aurangazeb. In 1664, Shivaji attacked Surat, the chief port of the Mughals and plundered it.

This time Aurangazeb sent Raja Jai Singh of Amber to fight against Shivaji. He made elaborate preparations and succeeded in besieging the Purander fort where Shivaji lodged his family and treasure. Shivaji opened negotiations with jai Singh and the Treaty of Purandhier was signed in 1665. According to the treaty, Shivaji had to surrender 23 forts to the Mughals out of 35 forts held by him. The remaining 12 forts were to be left to Shivaji on condition of service and loyalty to Mughal empire. On the other hand, the Mughals recognized the right of Shivaji to hold certain parts of the Bijapur kingdom. As Shivaji asked to exempt him from personal service to the Mughals, his minor son Shambaji was granted a mansab of 5000.

Shivaji visited Agra in 1666 but he was imprisoned there. But, he managed to escape from prison and made military preparations for another four years. Then he renewed his wars against the Mughals. Surat was plundered by him for the second time in 1670 Shivaji crowned all his lost territories by his conquests. In 1674 Shivaji crowned himself at Raigarh and assumed the title Captured. Then he led an expedition into the Carnatic region and captured Ginjee and Vellore. After his return this expedition, Shivaji died in 1680.

Shivaji was also a great administrator. He laid the foundations of a sound system of administration. The king was the pivot of the goverment. He was assisted by a council of ministers called Ashtapradhan. However, each minister was directly responsible to Shivaji.

Most of the administrative of Shivaji was based on that of Malik Amber of Ahmadnagar. Lands were measured by using the measuring rod called kathi. Lands were also classified into three categories – paddy fields, garden lands and hilly tracks. He reduced the powers of the exiting deshmuks and kulkarnis. He appointed his own revenue officials called karkuns.

Chauth and sardeshmukhi were the taxes collected not in the Maratha kingdom but in the neighbouring territories of the land revenue paid to the Marathas in order to avoid the Maratha raids. Sardeshmukhi was an additional levy of ten percent on those lands which the Marathas claimed hereditary rights.

Shivaji was a man of military genius and his army was well organized. The regular army consisted of about 30000 to 40000 cavalry supervised by havaildars. They were given fixed salaries. There were two divisions in the Maratha cavalry – 1. bargirs, equipped and paid by the state; and 2. silahdars, maintained by the nobles. In the infantry, the Mavli foot soldiers played an important role. Shivaji also maintained a navy.

The forts played an important role in the military operations of the Marathas. By the end of his reign, Shivaji had about 240 forts. Each fort was put under the charge of three officers of equal rank as a precaution against treachery.

Shivaji was really a constructive genius and nation-builder. His rise from jagirdar to Chatrapati was spectacular. He unified the Mararthas and remained a great enamy of the Mughal empire. He was a daring soldier and a brilliant administrator.

There ensued a war of succession after the death of Shivaji between his sons, Shambaji and Rajaram. Shambaji emerged victorious but later he was captured and executed by the Mughals. Rajaram succeeded the throne but the Mughals made him to flee to the Ginjee fort. He died at Satara. He was succeeded by his minor son Shivaji II with his mother Tara Bai as regent. The next ruler was Shahu in whose reign the Peshwas rose to power.

Balaji Viswanath began his career as a small revenue official and became Peshwa in 1713. As Peshwa, he made his position the most important and powerful as well as hereditary. He played a crucial role in the civil war and finally made Shahu as the Maratha ruler. He sought the support of all Maratha leaders for Shahu. In 1719, Balaji Vishwanath got certain rights from the then Mughal emperor, Farukh Siyar. First, the Mughal emperor recognized Shahu as the Maratha king. Second, he allowed Shahu to collect Chauth and Sardeshmukhi from the six Mughal provinces of the Deccan including the Carnatic and Mysore.

Baji Rao was the eldest son of Balaji Vishwanath. He succeeded his father as Peshwa at the age of twenty. The Maratha power reached its zenith under him. He initiated the system of confederacy among the Maratha chiefs. Under this system, each Maratha chief was assigned a territory which could be administered autonomously. As a result, many Maratha families became prominent and established their authority in different parts of India. They were the Gaekwad at Baroda, the Bhonsle at Nagpru, the Holkars at Indore, the Scindias at Gwalior, and the Peshwas at Poona.

Peshwa entered into an agreement with the Mughal Emperor in 1752. According to it Peshwa gave assurance to the Mughal Emperor that he would protect the Mughal Empire from internal and external enemies for which the Chauth of the northwest provinces and the total revenue of the Agra and Ajmer provinces would be collected by the Marathas.

Thus when Ahmed Shah Abdali invaded India, it became the responsibility of the Marathas to protect India. The Marathas fought very bravely against Ahmad Shah Abdali in the Third Battle of Panipat in 1761. But they got defeated. Many Maratha leaders and thousands of soldiers died in this battle. Balaji Baji Rao also died on hearing the sad end of this battle. Also, this battle gave a death blow to the Maratha power. Thereafter, the Maratha confederacy weakened due to internal conflicts among the Maratha chiefs.

After the decline of the Mughal Empire, the Marathas emerged a great power in India but they could not succeed in preventing the establishment of British power in India. The important couses for the downfall were that there was lack of unity among the Maratha chiefs like Holkar, Scindia and Bhonsle. Also, the superiority of the British army and fighting methods ultimate won.